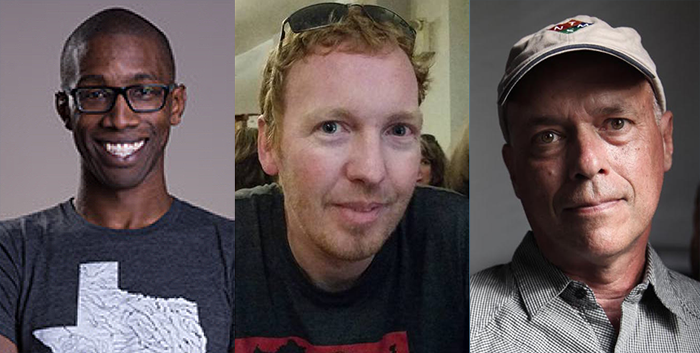 EarthArxiv has been a great example of an open, community-led initiative that isn't controlled by any one entity. It's been fast, and exciting, but ultimately the dispersed nature of it all will be a strength. COS had been working with many communities to launch preprint services in late 2016 (Socarxiv, PsyArXiv, engRxiv) and then another cluster in early 2017 (PaleoRxiv, AgriXiv, MindRxiv, SportRxiv, LawArXiv, etc.) had created some buzz. Chris Jackson reached out to me on Twitter in March to find out what options there were for someone to start something like this for Earth sciences.

A few weeks later, Bruce Caron and I were both attending the Sage Assembly in Seattle and talked about ESIP's potential interest in helping to organize it. I had also been introduced to Tom Narock on some other COS/ESIP projects, so it made sense to introduce Chris to them, as well as mention Brandon Whitehead's interest, who I had spoken to on unrelated topics that same month. As it turns out, he had already secured the eartharxiv.org url.

They and others met several times, and then I presented COS's vision for OSF Preprints and our mission to support research communities with public-goods infrastructure. Once they were ready to move forward, the COS product team and I worked through all the setup options and got things ready fairly quickly - 2 days to get things up for testing. Once the logo was picked, again we needed just a couple of days to be ready for the launch. The timing just worked out that everything was ready for #OAweek, and in the first 24 hours there were 9 or so submissions. That is very exciting to see.

We thought we'd ask them for their perspectives on the community-led efforts that resulted in this terrific effort. Answers are below!

How did you all meet?

Tom: Bruce and I have know each other for a few years. We met at, and are heavily affiliated with, a non-profit community group called the Earth Science Information Partners (ESIP). When Bruce and I started inquiring with COS about preprints, Matt Spitzer mentioned Chris’ name and indicated he’d been asking some of the same questions about Earth science preprints. I emailed Chris, let him know what we were up to, and he was happy to combine efforts bringing a lot of European interest to what we had started in the US.

Chris: I ‘met’ Tom on an informal Skype call in late-August, having heard through the grapevine about ESIP’s and OSF’s plans to establish an Earth Science preprint service. I still haven’t really met him, which is strange, but which speaks volumes for the way in which technology and commitment to a cause can make significant things happen!

Bruce: EarthArXiv gestated in an ESIP cluster: a self-forming, volunteer led open collective group. The cluster reached out to other pre-print service providers and users to discover their lessons-learned.  Matt Spitzer from COS and I had spoken in March in Seattle (at Sage event) about the new OSF platform, but the cluster was open to discuss all potential platforms and it looked at several before choosing the OSF platform (with some assurances that certain features like full-text search were coming soon).

When did you decide to launch EarthArXiv and why? There are other earth science options out there.

Tom: ESIP has been a great champion of EarthArXiv. They’ve provided email list, video conferencing, and other support to help gather the community around preprints. We spent several months gathering ideas on preprints and holding regular calls to discuss what this all might look like. Our main ideas were always open access, community governance, and rapid sharing of research. This aligned with what COS was doing and really resonated with the community--100 international volunteers came forward to offer their time and support. For me, that’s when I realized this was really filling a need and was something the Earth science community would really get behind.

Chris: The catalyst to launch EarthArXiv in 2017 came after Tom and I spoke in late-August and then through September; we decided that, rather than talk about it, we should make and launch it! In terms of other preprint service options, we felt they either had insufficient focus on Earth and some aspects of space science, so they remained unappealing to the broad community we now wish to serve, or had suboptimal infrastructure to allow growth and future developments.

Bruce: One of the lessons the preprint cluster discovered was how the Nature pre-print service failed, because it was too closely tied to their publishing effort. The feeling was that being community-led was not just the right thing to do, it was the only way this effort can really succeed. At the ESIP Summer meeting, in a breakout session on the pre-print service, the whole room was enthusiastic about three things: 1) an open platform; 2) a broad community-led effort, and; 3) that the service should not simply feed publications, but disrupt how Earth science is currently published by opening up to a much larger variety of objects being made public: data, software code, null-results, student work, etc.

It feels like a real grass-roots effort. Is that how you all see it? Why do you think it came together that way?

Tom: Absolutely. We’ve gotten input from folks all over the world in a number of Earth science domains and from folks at all levels of their career. A true grass-roots effort has been one of our objectives and it’s been exciting to see it take shape.

Chris: It is indeed a grass-roots effort! And that’s how we like it. By collectively creating something, we hope people feel proud of and value it. They will want to see it succeed. The fact EarthArXiv is community-led is perhaps representative of the group currently championing ‘Open Science’ in general; e.g. early-adopters of new and hopefully sustaining trends and technological developments, who want to make a difference and contribute to their broad community.

Bruce: ESIP has been providing the community with communication and collaboration tools (teleconferencing, Slack, email lists, some staff support) knowing that this effort is really beneficial to its members, and is well aligned with its goals. The cluster was encouraged to reach out to as many Earth science organizations as it could, to get their perspectives and begin to broaden the team. By August open calls for participation went out, and Tom connected with Chris, who was keen to help lead the initial effort. At that point, the larger community began to take hold, and the teleconferences and the email list became international.

How did you decide to divide up the tasks?

Tom: Whoever was willing! There’s been a lot to do along the way and we’ve tried to leverage the skills and expertise of our volunteers. Chris, Bruce, and I have been coordinating everything overall, but we’ve gotten a lot of volunteer support as well as some advice from others like ASAPBio, PaleoArXiv, and COS who really know the preprint space.

Chris: It’s been running like a well-oiled machine...not! More seriously, we have video-conferences every two weeks to decide on action items and assign tasks. At the start, this was split between Matt, Bruce, Tom, and Chris, but with increasing numbers of volunteers coming on board, we now have a wider-range of expertise to draw on and more capacity.

Bruce: In order to build the most diverse advisory council as possible, the decision was made to chose these individuals at random from the initial 100+ who had already said they were willing to serve. The result is a council with members from four continents that has students and senior academics and a broad range of academic interests. More than 150 volunteers have selected to serve as ambassadors to help others understand how pre-prints work.

Are you fundraising? What plans do you have for sustaining the service?

Tom: We raising money to print EarthArXiv stickers that will be used as promotional give aways and help introduce more Earth scientists to the benefits of preprints. At the moment, we’re focused on our public launch and promotion. However, we will need to revisit fundraising and sustainability soon.

Chris: We are also in discussions with several professional societies regarding a higher-level of financial support; this will allow us to travel to promote EarthArXiv to as wide a range of the Earth Science community as possible.

Bruce: Here is the campaign URL to purchase EarthArXiv stickers.

Crowdsourcing your logo design was a cool idea. What got you all thinking that way?

Tom: It’s a good thing we’re in science because Chris and I would not make it as artists. :)  After struggling with a logo design on our own, we realized we should ask for help. It also seemed like a good way to engage the future users of EarthArXiv and let them help shape what it looked like. It really fit with our philosophy that EarthArXiv should be community-driven and the social media response was terrific. There were a number of great submissions.

Chris: We’re community-led, hence it made sense for one of the community to design the logo! It’s awesome, right?

Where do you see the earth sciences heading in terms of getting research out there? Do you consider yourselves traditional in that you want to use journals and more typical means of dissemination, or do you see that changing with the launch of this service?

Tom: The traditional journal/peer-review process has merit and I think it’ll be around for some time. Open and rapid access to research are two important benefits of preprints that I’m looking forward to in the Earth science. Also, the API access offered by COS combined with research that’s happening in how scientific publishing occurs is leading to some very exciting future extensions. I think this may be the beginning of a change in how scientific communication happens.

Chris: Well, preprints will play a huge role in this, although the typical journal-route of dissemination will certainly be around in the short- to medium-term. In fact, more ‘classic’ publishers, professional societies, such as AGU with ESSOAr, and research funders (e.g. Wellcome Trust, German Science Foundation) are viewing preprints as a valid and desirable method for research dissemination. We still use journals as a method for publishing, although clearly the game is changing….